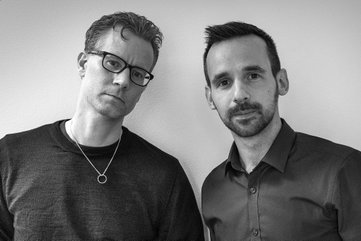 All in Twilight is a brand new project featuring Peter Knudsen, jazz pianist, and the classical guitarist David Härenstam. Together the duo engage in explorations of the music by Japanese composer Toru Takemitsu, both through improvisation and newly written arrangements. The result? A unique meeting between the worlds of jazz and 20th century art music, as well as between eastern and western culture. The concerts are built around the piece All in Twilight and includes music by Astor Piazzolla, Heitor Villa-Lobos and Santiago de Murcia (Photo: John Malander)

Toru Takemitsu  All in Twilight

Toru Takemitsu  All in Twilight

Toru Takemitsu All in Twilight

Reviews: 'An intimate and fruitful meeting across the genre boundaries.

David Härenstam belongs to our country's top classical guitarists, and Peter Knudsen is a highly rated jazz pianist and teacher at Örebros Music Collage. The two have put together a cross-border concert program - a mix of classical, jazz, tango and folk music. The duo played selected movements from the Japanese composer Tōru Takemitsus suite All in Twilight, and Astor Piazzola's fiery Histoire du Tango. In addition, Erland von Koch's 'Utanmyra variations' were interpreted, based on the folk melody now associated with Jan Johansson, as well as a Hector Villa Lobo's guitar concert. As an encore, one of Piazzola's most beautiful melodies, Oblivion, was invited. The compositions were chosen with care: beautiful, virtuoso and rarely heard.'

'The improvised elements did not feel clogged, but worked very well in the context. Sometimes it was even difficult to know what was written and what was improvised. This was a concert night, which once again showed that a meeting between jazz and other musical genres is not only possible, but at best - like here - fruitful.'

Peter Knudsen (1980-) started playing the piano and also began writing his own music at the age of 10, and discovered jazz and 20th century music as a teenager. At the age 20, he was awarded Ingvar Johansson’s scholarship for young jazz musicians.

He studied at the Music Acamedy in Gothenburg during 2001-2006 for Anders Persson, Anders Jormin among others. Under this period, he formed his own trio as well as the quintet blåeld. The group released its debut album Aurora in 2006 (Footprint Records), featuring original compositions crossing the boundaries of jazz, pop and 20th century music. He also toured with the Zappa tribute band “Great Googly Moogly” in Swedish jazz clubs and festivals, as well as the German festival Zappanale.

Having worked for some years with adapting the music of Debussy and Ravel for jazz trio, Peter and his trio recorded “Impressions- a tribute to Debussy and Ravel” in 2008, released on Found You Recordings. During 2009-2010, the trio did two summer tours in France. The trio has also performed at Swedish jazz clubs, festivals and concert halls.

In 2010, he launched the project “P-B revisited”, a quartet featuring Joakim Milder on Saxophone performing new arrangements of Swedish composer Peterson-Berger’s music. In 2011 and 2012, the group toured with the material and in 2014 an album was released, recorded in the composer’s home Sommarhagen.

His albums explore themes as diverse as French Impressionism, Swedish Romanticism, as well as his own compositions inspired by nature, literature and life itself. These can be heard on his octet album ”Sagas of the Present”, released by Italian label CAM Jazz and reviewed favorably by Down Beat, All About Jazz alongside European magazines. He is currently writing big band compositions for the acclaimed Stockholm Jazz Orchestra, which will be touring with his music in the autumn of 2016.

Since 2009, Peter is resident in Stockholm, and also teaches piano and ensemble playing at the Music Academy of Örebro University. As part of a teacher exchange, Peter has toured in Brazil on two occasions with his Brazilian-Swedish trio featuring drummer Kiko Freitas.